I don’t usually do episode titles, but given that my friend Brandi had been posting since last night about today being “2319”, I kind of felt like I had to add it in 🙂 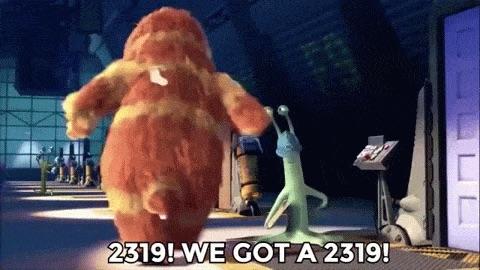 Rob’s 2019 socks, based on Sock Recipe: A Good, Plain Sock by Stephanie Pearl-McPhee. Knit out of Gnomespun Yarn Phouka Base in the Brave colourway on size 2.5mm (US 1.5) needles.

Tea: Tonight’s tea is David’s Tea Green Maitcha – it’s a steamed Japanese green tea with toasted and popped rice. I find it a very relaxing flavor, very similar to what you’re usually given in sushi restaurants! It’s one of my “calm, centre, and focus” teas

I finished watching Marvel’s The Runaways – I’m still not entirely sure what to make of it. It doesn’t seem to have anything remotely to do with the Marvel universe, and was a very strange show. It almost made me feel like I was watching a David Lynch series at times.

I’ve now started watching Season five of Agents of S.H.I.E.L.D., and the premise just keeps getting weirder and weirder every season. I’ve heard in various places that the series really jumped the shark before season five, and I’m kind of feeling compelled to agree. I think it jumped the shark at the end of season three to the beginning of season four. I’m kind of looking forward to being done with it so I can move on. I’m only ONE more series away from Infinity War! It’s so close, I can TASTE it.

Pods Cast around the Internet

So this week in podcasts…

TrueCanuckGirl released three new videos on her Steeped in Books Booktube channel, including her January 2019 used book haul, the February To Be Read list as well as the Weekly Reading Vlog. MinaPhilipp released her Vogue Knitting Live recap and haul on The Knitting Expat Podcast. fiberific has put out a new Live CraftNChat (sort of like a VKN) this week. Selmasknits has released episode 32 of her podcast in both Englishand French this week. udontcallmeles and LaLa put out episode 425 of The Knit Girllls podcast. jrbirdkid and KellySpins released episode 120 of the Must Love Yarn podcast, and TheCATTLady released episode 90 of The CATT Lady podcast!

I don’t have much else to talk about this week, and I didn’t want to tempt fate with the new recording software. It didn’t quite work out the way I had hoped, but I will be getting a better laptop in the next few weeks, so hopefully that will end my recording woes (and then I can concentrate on lighting!).

Be kind to one another! 🙂 Have a great week, everybody.

The ice situation is becoming a bit alarming. And this is after maintenance climbed up to knock them all down with a sledgehammer last week! #WinterInGatineauIsNoJoke #TheWaywardSkein
It's a good day to #FlyPorter!!
My last pumpkins just went in the oven... The final one had some extra gifts for me this year! Sprouted seeds!! Some of them even had branched roots already, so I'll be choosing the most advanced ones, allowing them to sprout a bit more, and then planting them in my sunny bay window. Experimentation is afoot!
%d bloggers like this: